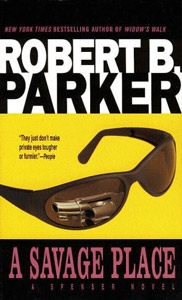 A Spenser Novel
By Robert B. Parker
Published by Thomson Gale
Buy from:

In a city of beautiful women Candy Sloan wants to be more than a pretty face. So Spenser is hired to bodyguard the L.A. TV reporter while she pursues a story of mob influence in the movie business. For the Boston P.I., the headlines in Hollywood are being written in blood and tears—as some people shoot film, and others choose guns...