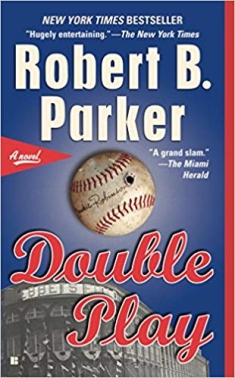 By Robert B. Parker
Published by Gardners Books
Buy from:

Robert B. Parker fans have been quick to embrace each addition to his remarkable canon, from the legendary Spenser series to the novels featuring Jesse Stone and Sunny Randall. And his occasional forays into the past Gunman's Rhapsody, a fresh take on Wyatt Earp, and Poodle Springs, based on a Raymond Chandler story -- have dazzled critics and confirmed his place among the greatest writers of this century. With Double Play, he presents us with a book he was literally born to write.

It is 1947, the year Jackie Robinson breaks major-league baseball's color barrier by playing for the Brooklyn Dodgers -- and changes the world. This is the story of that season, as told through the eyes of a difficult, brooding, and wounded man named Joseph Burke. Burke, a veteran of World War II and a survivor of Guadalcanal, is hired by Brooklyn Dodgers manager Branch Rickey to guard Robinson. While Burke shadows Robinson, a man of tremendous strength and character suddenly thrust into the media spotlight, the bodyguard must also face some hard truths of his own, in a world where the wrong associations can prove fatal.

A brilliant novel about a very real man, Double Play is a triumph: ingeniously crafted, rich with period detail, and re-sounding with the themes familiar to Parker's readers-honor, duty, responsibility, and redemption.