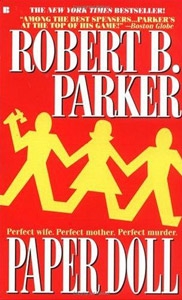 A Spenser Novel
By Robert B. Parker
Published by Smithmark
Buy from:

Spenser tracks a mystery woman who refuses to rest in peace, in Robert B. Parker's most beguiling thriller yet. Sam Spade. Philip Marlowe. Lew Archer. Spenser. Like his legendary predecessors, the tough and classy Boston PI has become an American institution. With Paper Doll, Robert B. Parker takes Spenser down a sinister path, where every welcome masks a warning and identity is paper-thin. Hired by Loudon Tripp, an aggrieved Boston aristocrat who believes the brutal street slaying of his wife, Olivia, to be something other than random violence, Spenser immediately senses Tripp's picture-perfect version of his family's life is false. For starters, the victim's reputation is far too saintly, while her house is as lived-in as a stage set and her troubled children don't appear the product of a happy home. Spenser plunges into a world of grand illusion, peopled by cardboard cutouts, including: a distinguished public servant with plenty to hide; a wealthy executive whose checks bounce; a sleepy southern town seething with scandal; and the ambiguous Olivia herself. Consummately mysterious and smokily sensual, Paper Doll is Parker and Spenser at their compelling best.