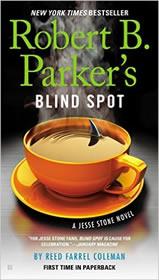 Police Chief Jesse Stone is back in the remarkable new installment of the New York Times-bestselling series.

It's been a long time since Jesse Stone left L.A., and longer still since the tragic injury that ruined his chances for a professional baseball career. When Jesse is invited to a reunion of his old Triple-A team, he is forced to grapple with his memories and his regrets over what might have been.

But his time at the reunion is cut short when a young woman is found murdered and her boyfriend, a son of one of Paradise's most prominent families, is missing and presumed kidnapped. Though seemingly unrelated, there is a connection between the reunion and the crimes as Jesse discovers that one of his former teammates may in fact be his main suspect. Sometimes, danger comes not from where you expect it—but from your blind spots.