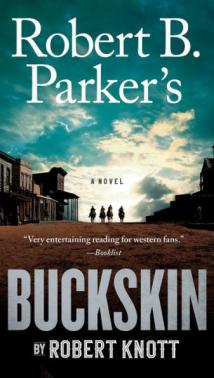 Itinerant lawmen Virgil Cole and Everett Hitch pursue a vicious killer in the grittiest entry yet of the New York Times-bestselling series.

After marshals Virgil Cole and Everett Hitch lay Appaloosa's sheriff to rest, an emerging handful of men eagerly vie for the deceased sheriff's vacant office. No sooner are various campaigns under way when gold is discovered in the foothills just outside of town, sending Appaloosa buzzing with excitement.

With the strike, a slew of new problems develop for Cole and Hitch. Two shrewd mining factions and their hired gun hands square off over the claim. And on the eve of the new sheriff's appointment, a powerful snowstorm blankets Appaloosa. As the town braces for the severe weather, Cole and Hitch's problems multiply with the emergence of anonymous letters to the editor of the Appaloosa Star, leading the duo to a series of murders and the pursuit of a vicious serial killer.

"Knott ups his game with every entry he contributes to the Cole-Hitch series. The dialogue is sharper, the plotting more complex, and Knott is mastering Parker's spare style. Very entertaining reading for western fans." —Booklist