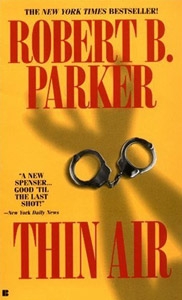 When a Boston police detective's adored young bride, Lisa St. Claire, disappears without a trace, he enlists Spenser's help in tracking her down. Sleuthing from a New England college campus to the slick sports clubs of L.A., Spenser discovers all about Lisa—including her past history of prostitution, substance abuse, and self-destructive love affairs—and suspects she is being held prisoner by her sociopathic Latino ex-lover in his crumbling tenement fortress deep within the barrio of a burned-out Massachusetts mill town. Accompanied by a Chicano shooter with an ironclad attitude and an unflinching sense of honor, Spenser sets in motion a complex plan to rescue Lisa. As he wheels and deals with boozy, broken cops and messianic local warlords, he is forced to face some brutal truths and question the very meaning of passion, manhood, and justice.