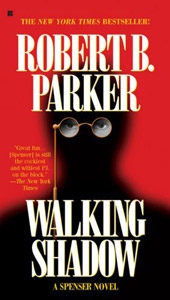 With an unbroken string of bestselling suspense novels behind him, Robert B. Parker is nothing if not world-class. Now, after the success of Paper Doll, applauded by The Boston Globe as "one of the best Spensers in a decade," Parker returns with his two-fisted sleuth in Walking Shadow—a twisty, ambitious whodunit, which finds them both breaking new ground. A Massachusetts waterfront town. A small repertory theater with a big reputation. A soupcon of scandal. And Spenser is on hand to steal the scene. Hired by the Port City Theater Company's board of trustees to investigate the director's claim that he is being followed, Spenser feels like a fish out of water—until an actor is gunned down during a performance of a politically controversial play. Then Boston's premier private cop and his cohort, Hawk, go into action, plunging straight into a maze of motives that constitutes a master class in the difficulty of judging reality from appearances. Spenser soon discovers that solving the actor's murder is only a piece of the puzzle. From covert carnal connections within the community to municipal corruption with international tentacles; from petty troublemakers to major malefactors for whom murder is merely a day at the office—this case has everything it takes to stump the sharpest of Sherlocks. And nobody loves a challenge more than Spenser. Heady and sardonic, with an unpredictable cast of lovers, liars, killers, and clowns, Walking Shadow entertains even as it ponders the instability of identities. It is a thoroughly engrossing performance by a classic talent.